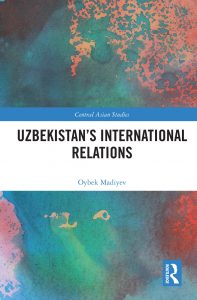 Since the death of Islam Karimov in 2016, Uzbekistan has opened up economically while becoming more assertive in Central Asia affairs, placing itself at the center of discussions on border delimitation, water scarcity, and infrastructure development. Oybek Madiyev’s timely new book Uzbekistan’s International Relations offers a fresh perspective on Tashkent’s ever-changing relations with Russia, China, the United States, Japan, and the European Union. Madiyev argues each of these actors has two key motivations: the desire to invest in the energy market and to capitalize on Uzbekistan’s geopolitical potential. The book is written through the lens of a neo-Gramscian approach to political economy, emphasizing the “historical development of domestic and international settings” (p.6) and how foreign policy emerges from configurations of material capabilities, ideologies and institutions. Madiyev takes stock of regimes, civil society, business communities, and other actors who inform Uzbekistan’s foreign policy in his analysis. Alongside publicly available statistical data, country reports, and news sources, the book draws from individual interviews with former and current state officials, providing readers with an insider’s perspective on the factors which drive foreign policy decision-making.

Madiyev’s main argument is that due to the absence of a robust civil society and the closed nature of the regime in Uzbekistan, Russia and China have established stronger economic relations with the country than other international players. The two great powers were able to exert influence on Uzbekistan  by “engaging directly with the top, or state apparatus, through providing political support for the ruling regime” (p.9). Due to Uzbekistan’s state-centered foreign policy under Islam Karimov, the country was susceptible to great power influence and its international relations were characterized by haphazard foreign policy decisions as demonstarted by the country’s frequent withdrawals and reentries into regional blocs. He argues that in the presence of a ‘historic hegemonic bloc,’ society’s “interacting elements create a larger unity, which is able to sustain various domestic and external pressures on various ‘manoeuvres’ from China and Russia” (p.55). But such a historic hegemonic bloc is absent in Uzbekistan.

While providing an inclusive approach regarding the actors and forces that shape Uzbekistan’s foreign policy, the application of a neo-Gramscian approach does not account for a regime’s ability to reverse major powers’ influence even in the absence of a historical hegemonic bloc. Karimov’s explicit assertion in 2015 “that Uzbekistan was not interested in either the Eurasian Economic Union or the Customs Union” (89) in the aftermath of the Crimean annexation is one example when the state was able to push back against Russian influence. Moreover, a neo-Gramscian approach in Uzbekistan’s case shows that the lack of an active civil society and other domestic interests, in fact, incentivizes the regime to make radical shifts in foreign policy without significant domestic costs. In the aftermath of the 2005 crackdown in Andijan, Karimov’s government jettisoned major U.S. investors, mining companies, and NGOs, despite the ensuing economic consequences and loss of support from donors.

Putin’s arrival to power and the subsequent consolidation of authoritarianism in Russia marked the advent of the ‘war of manoeuvre’, a direct confrontation with the state government, as it created an environment where Putin’s siloviki-based regime could directly engage with the Central Asian ruling regimes. Madiyev argues that for Putin, “Russia’s foreign policy is understood as a result of domestic economic interests” (p.80), a pattern which Madiyev calls the ‘economization of foreign policy’ (p.80). Maintaining access to Uzbekistan’s gas supplies by bringing companies such as Gazprom and Lukoil to the Uzbek market constituted Russia’s main domestic interest. The second pillar of Russia’s foreign policy, the Eurasianist perspective, “prioritizes its relations with the former Soviet countries and has the potential to expand beyond the post-Soviet sphere and ultimately integrate with broader Asia” (p.86).

The book situates China’s dynamic economic relations with Uzbekistan after 2002 within the context of Beijing’s ‘going out’ (p.110) strategy. Like with Russia, Madiyev argues that the goal was primarily economic: “the objective was to create conditions for certain Chinese companies, mainly extractive industries, to invest abroad, compete with the biggest companies in the world, and secure natural and mineral resources” (p.111). In the domestic realm, the need to develop China’s western provinces at a time when they were lagging behind its coastal regions, drove the government’s decision to launch the BRI in 2013. According to the author, the Chinese government prioritized a multilateral approach with the Shanghai Cooperation Organization (SCO) acting as an initial platform for establishing energy-related projects and trade relations with Uzbekistan. In fact, all of the flagship initiatives that share the goal of maintaining China’s energy security, “the Asian Infrastructure Investment Bank, the SCO, and the Silk Road Economic Belt are increasingly interlinked” (p.125).

U.S. relations with Uzbekistan have been characterized by constant maneuvering between human rights, security interests and energy, according to the author. Madiyev argues that U.S. programs to promote economic and political reform in Uzbekistan were, in fact, “vital investment protection measures or mechanisms to implement its long-term interests in the region” (p.139). At the period of their closest relations, the countries’ relations rested on security, which gained prevalence after the 1999 terrorist attacks in Tashkent and the launching of the  Global War on Terror in the aftermath of 9/11.  Facing a breakdown of relations after the 2005 Andijan events, Madiyev argues, the U.S. has switched to emphasizing counterbalancing China and Russia’s presence by introducing the New Silk Road and C5+1 initiatives. While the New Silk Road was a strategy directed at reinvigorating the traditional areas of U.S.-Uzbekistan cooperation since 2011 such as energy and security interests in Afghanistan, C5+1 was a larger U.S. initiative aimed at building stronger connections between Washington and the entire region in light of crystallizing Chinese influence.

Following independence, Japan emerged as a relatively neutral player interested in Central Asia’s energy resources and developing infrastructure. Japan came with less baggage than its rival great powers. Madiyev states that Karimov “was aware that Japan did not possess any imperialist ambitions vis-à-vis Central Asia and saw it as a safe and reliable force in comparison to Russia and China” (p.182). Despite extensive investments, Madiyev suggests that Japan was unable to establish effective trade relations with the country due its one-size-fits-all approach to the region and lack of a tailored approach towards Uzbekistan.

Although the European Union (EU) initiated Partnership and Cooperation Agreements with each Central Asian country, the EU, like Japan, was unable to build effective trade relations with Uzbekistan in part due to the absence of a tailored approach to the country and also due to Uzbekistan’s persistent authoritarianism.  Madiyev argues that the EU’s interests in Uzbekistan were driven by concerns over access to Afghanistan and a long-term goal of facilitating energy exports from Central Asia to Europe. As in the case of the U.S., the 2005 Andijan events were followed by the distancing between the EU and Uzbekistan. The ensuing rapprochement spearheaded by Germany in 2007 and the introduction of the Strategy for a New Partnership demonstrated that the EU was ready to ease the assertive norm-based framework for the sake of its long-term goals in maintaining energy security.

Madiyev concludes by stating that Uzbekistan will continue to have more effective and lasting ties with Russia and China due to the structural nature of both states that largely insulate civil society from the decision-making process. At the same time, he suggests that the initial steps taken towards building a dialogue with civil society and economic liberalization signal “Uzbekistan’s willingness to strengthen ties with the West” (p.52). While increased foreign investments and support for the business sector have shaped economic reforms, Madiyev emphasizes that political “reforms are still top-down” (p.225). The country’s recent interest in joining the Eurasian Economic Union also makes it questionable that the current reforms are sufficient to distance the country from Russia and China’s influence.

Two drivers of Uzbekistan’s foreign policy are largely missing from Madiyev’s analysis. First, he does not discuss the Central Asian states tendencies to employ multi-vector policies, by building relations with different international actors in different areas of interest. Second, as Madiyev recognizes, the book does not address Uzbekistan’s relations with its neighbors, which has been the key foreign policy priority under Shavkat Mirziyoyev. Increased regional connections could become a form of “balancing regionalism” whereby the Central Asian states signal to external powers that they can solve the region’s problems without outside help. At the same time, Uzbekistan’s emergence as a strong economic and political actor is likely to introduce competition within the region, particularly with Kazakhstan, which could undermine these efforts. These shortcomings notwithstanding, the book is essential reading for those interested in the evolution of the foreign policy of Central Asia’s most populous state.

Zhibek Aisarina is a graduate student at Nazarbayev University and a research assistant at The Oxus Society for Central Asian Affairs. Follow her on Twitter @ZhibekAis.