Soft Power in Central Asia: The Politics of Influence and Seduction

Soft Power in Central Asia: The Politics of Influence and Seduction

Kirill Nourzhanov and Sebastien Peyrouse. (eds). Soft Power in Central Asia: The Politics of Influence and Seduction. Rowman and Littlefield, 2021. 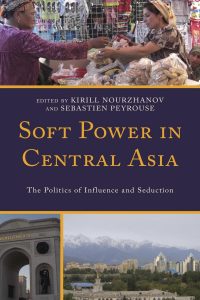 Observers often portray Central Asia as a site of contestation among major world powers, typically focusing on the harder dimensions of the military and economic balances of power. Shifting attention away from this focus, Soft Power in Central Asia – The Politics of Influence and Seduction, edited by Kirill Nourzhanov and Sebastien Peyrouse, examines the soft power dimensions of the relationships between Central Asian states and foreign actors. Peyrouse and Nourzhanov espouse the central premise that “Central Asian states are by no means mere pawns in the regional or global political games of a handful of powerful states, as was the case in the 19th century” (p.3) and that “it would be presumptuous to consider that a foreign actor, however powerful, could impose its influence only through military and economic strength” (p.4). The authors view soft power – the winning of hearts and minds – as a crucial factor in determining the fate of the ambitions of foreign actors in the region.

This collection is one of the first books to analyze the dynamics and complexity of soft power in this region. The book is divided into two parts. Part One focuses on the soft power strategies of the various external actors. Part Two takes the perspective of the Central Asian states, analyzing how they respond to these efforts.

In Chapter 1, Alexander Diener and Vincent Artman highlight how U.S. foreign policy in the region suffers from both a real and perceived lack of engagement. Coupled with an increasing sense of disillusionment towards the U.S. among Central Asians, this means that the cultural attraction of the U.S. is limited, a finding that reflects the argument made by Edward Schatz in his recent book Slow-Anti-Americanism. While Chapter 2 illustrates how Russia still wields considerable soft power in Central Asia, Chapter 3 demonstrates how China still lacks cultural attractiveness for many Central Asians, with Sinophobia still widespread.

Turning attention to the European Union, Emilian Kavalski argues that with accession not on the table, the EU is unable and unwilling to craft a coherent soft power strategy for the region. Importantly, the authors in the book also examine the soft power efforts of regional powers, such as Turkey (Chapter 5) and Israel (Chapter 6). The authors find that while Turkey’s Islamic soft power sparks friction with Central Asia’s secular regimes, Israel’s non-confrontational approach, focusing on economic relations and cultural exchange, seems to be more effective in generating goodwill. To draw attention to the agency of Central Asian states and societies, the chapters in the second section examine the reception of soft power efforts in Kazakhstan, Kyrgyzstan and Tajikistan.

While the book is important for drawing attention to soft power in Central Asia, the book does have some weaknesses. First, chapters could have compared different external actors more explicitly, examining the interaction and contestation between the “Western” powers  in Central Asia, for example. Second, some of the evidence presented in the book is based on dated and incomplete data and contradicts more recent research. A number of authors downplay the soft power of Russia, sometimes contradicting themselves or other chapters. In Chapter 7, Reuel Hanks admits that Russia possesses enormous cultural influence in Central Asia and is viewed more positively than other powers, yet argues that favorability towards Russia among Kazakhs is “lower than one might anticipate” (p.208) without backing this claim. Similar sentiments are found in Chapter 8, where Aminat Chokobaeva and Drew Ninnis claim that the use of the Russian language has been in steep decline and will continue in the future (p.217), contradicting the current evidence in Kazakhstan.

Despite these shortcomings, the chapters provide the reader with significant insights into the general dynamics of soft power in the region and the effectiveness of different soft power approaches. Crucially, the authors highlight the limitations of soft power. Neither the promotion of liberal democratic norms by the EU or the USA, nor the promotion of Islamic norms by Turkey seem to have achieved much traction. As the case of Israel demonstrates, a “non-confrontational” approach which focuses on promoting technical expertise and cultural exchanges rather than norms, seems to be most effective.

This volume is a valuable and timely contribution to the literature on soft power in Central Asia. Through the comparison of the array of different case studies of soft power projection by different actors, this book allows the reader to better understand which kinds of soft power instruments are particularly effective and which are not. The case studies in the book repeatedly demonstrate that actors in Central Asia are not passive observers on the grand chessboard of great powers. Instead, they shape and contest the soft power strategies of external powers in important ways.

John Irgengioro is a PhD fellow funded by the Flemish Research Foundation (FWO). His research is on the soft power of great power actors (Russia, China, European Union, United States) in Central Asia.