Tajikistan’s capital Dushanbe is undergoing a rapid urban transformation. The once quiet town known for its green foliage is now striving for a bustling modern image amidst the country’s search for an identity. The city’s streets were once the pride of Soviet architects sent from Leningrad and Moscow, but now they are dotted with glass high-rises and grand administrative structures sponsored by China and Saudi Arabia – a transformation that comes at the price of erasing Dushanbe’s Soviet past, of residents losing their childhood homes and memories, and of gentrification.

While this transformation isn’t unique to Tajikistan and can be seen in Western cities that adopted neoliberal policies like Vancouver, Seattle, Los Angeles, New York, London, and in the Global South, it is a recent phenomenon for Dushanbe, where major redevelopment began just six years ago.

While nominally a democracy, Tajikistan has a corrupt and unresponsive political system offering the capital’s residents few mechanisms for influencing the city’s redevelopment process from the bottom up and leaving them to merely argue over what this redevelopment means. These arguments are pitting a shrinking but vocal class of Russian-speaking, middle-class natives of Soviet Dushanbe who oppose these changes as a targeted erasure of its history against the city’s Tajik-speaking majority, many of whom moved here from the countryside and view the changes in the capital as a sign of a nation coming into its own. Stuck between an unresponsive political system and two predominant narratives is Dushanbe’s native youth. Born in Dushanbe after 1991, as Tajikistan became independent, this young predominantly Russian-speaking generation usually views their city’s transformation in nuanced terms but struggles to have their voices heard.

In his famous essay The Right to the City, David Harvey suggested that “to claim the right to the city is to claim some kind of shaping power over the processes of urbanization, over the ways in which our cities are made and remade, and to do so in a fundamental and radical way.” Although there are no meaningful mechanisms for Dushanbe’s young people to claim their right to the city, they are finding informal ways to do so, from documenting the changes to challenging and negotiating the narratives surrounding Dushanbe’s post-Soviet transformation on their social media profiles. Urban development has thus become one of many important social issues dissected via digital methods of storytelling. From digital vigilantism countering shortcomings in law enforcement to feminism activism fighting patriarchy in Tajikistan, this trend is a reflection of both the young people’s age and the nature of the local telecommunications market where mobile data is quite expensive but cell service providers often include free data for specific social media platforms.

Aziza Kosimova, a 21-year-old social activist, turned to social media to make sense of the changes in her rapidly evolving hometown after her childhood home was demolished. Her project, Youth in Dushanbe, aims to educate young people about the history and culture of Dushanbe. Most of Kosimova’s work focuses on the city’s last remaining iconic Soviet buildings, like the 1929 powder-blue Lohuti Theatre – Soviet Tajikistan’s first theater – and the Rohat Teahouse, a 1958 building which W. Averell Harriman, John F. Kennedy’s Assistant Secretary of State, called “the most original teahouse in the world” during his 1959 visit.

Youth in Dushanbe offers a combination of live presentations, interviews, photos, and videos – some of which boast over 22 thousand views. Kosimova criticizes the media in Tajikistan for not being effective in providing a platform for people to have a meaningful discussion about the changes in Dushanbe. “People have the need to speak out but we don’t have any independent platform.” She believes that social media projects like hers are important as they allow people of different generations to voice their opinions. 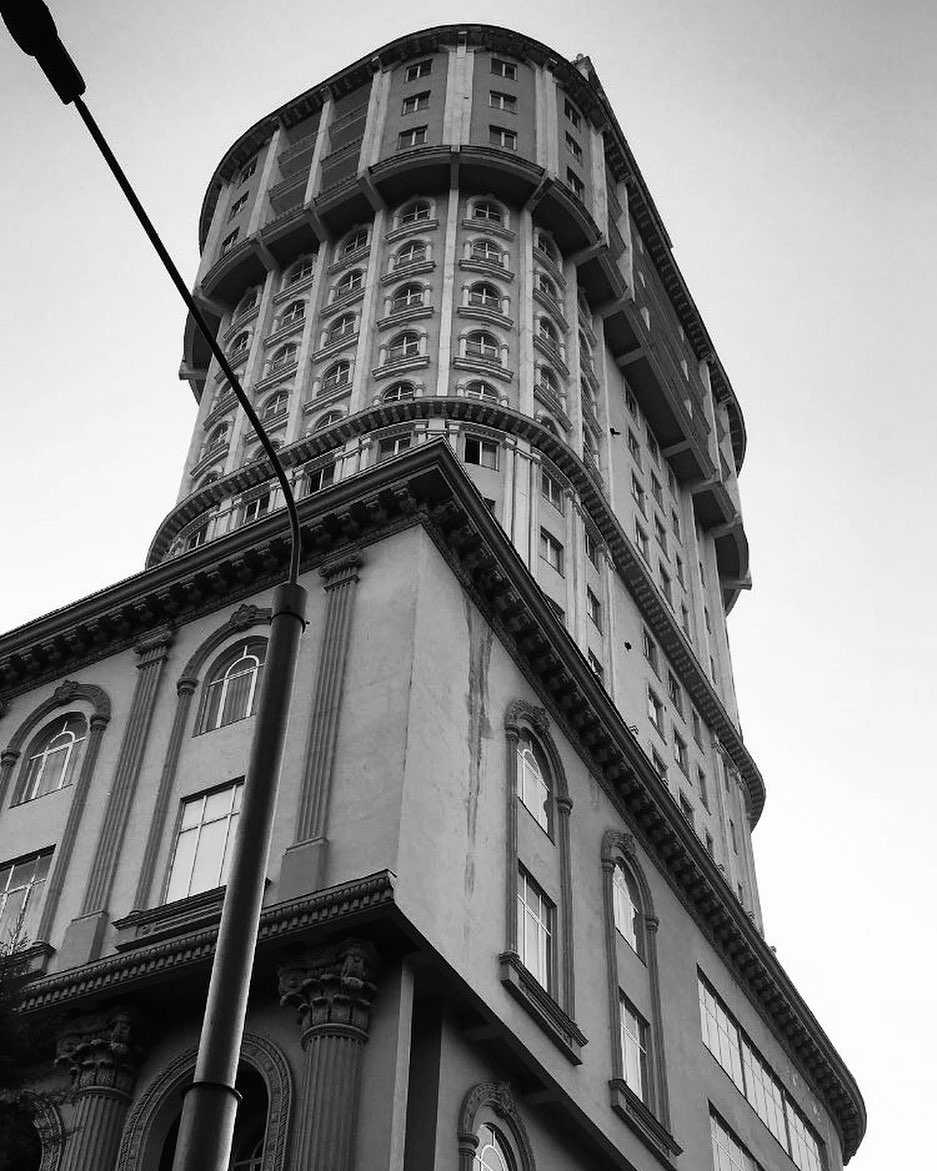 Manzura Muinova, a 31-year-old architect and interior designer, uses her Instagram account to discuss the architecture and design of new buildings and how they fit with Dushanbe’s style. In her public musings about the seemingly eclectic changes in Dushanbe, Muinova compares her hometown to a teenager who tries on many different items of clothing in search of their unique style.

Aminjon Khaydarov’s Dushanbe Instagram account about urban photography and videography around Dushanbe has amassed over 19,000 followers – a relatively modest number in the hierarchy of Instagram fame but a sizable chunk of Tajikistan’s 554,000 active Instagram users. The account captures the changing streets of Dushanbe by contrasting historical footage with emerging new architecture and high rises. Refusing to highlight only the glamorous side of the transformation and being honest in capturing the authenticity of the daily life of Dushanbe’s residents, Khaydarov’s account is a rare example of combining the nostalgia for the old Dushanbe while remaining open towards change.

Another Instagram account, urbandushanbe, is dedicated to “a wonderful era of the rapid urbanization in Dushanbe” and captures stylish young people in the city’s streets and in notable places, old and new.

It remains to be seen how effective youth efforts on social media will be, especially considering the emerging critique of social media algorithms, the impact of social media on democracy, and discussions around slacktivism and clicktivism. Although social media is relatively free of government censorship in Tajikistan, people are not always ready to share their views and experiences openly. Kosimova recalls reaching out to people to participate in her social media project and facing hesitancy from her respondents to be included in her digital materials. “There is self-censorship. People don’t understand [social media]. People are fearful.”

Another social media blogger and activist Timur Temirkhanov shares the experience of his fellow Dushanbe residents who have been trying to facilitate a public discussion to influence urban development by sending letters to the authorities, writing newspaper articles, and sharing posts on social media and admits that these efforts mostly remain rejected and ignored by decision-makers. “The only thing left for [young people] to do is cry and post photos of the old city on social media,” he says.

Sher Khashimov is a Tajikistan-born freelance journalist and researcher based in Washington DC, USA. In his work, he examines social and cultural issues and issues of identity in post-Soviet Central Asia. Follow him on Twitter @sher_khashimov

Tahmina Inoyatova is a Ph.D. candidate at Simon Fraser University in Vancouver, Canada. Her research interests include the intersection of media, urban space, culture, identity, and power focusing on her home country Tajikistan and Central Asian region. Follow her on Twitter @TahminaIn