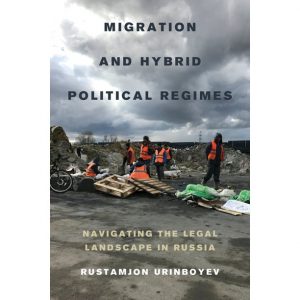 Despite attracting millions of labor migrants since the early 2000s, Russia continues to be stubbornly referred to as an emerging immigrant destination in the field of migration studies, overshadowed by more traditional immigrant-receiving countries in Western Europe and North America. Russia has remained on the margins of most global histories of migration and labor mobility as a country that cannot be easily mapped onto the Global North/South divide.

The transformation of Russia into the world’s second largest destination for migrants is one of the defining developments within the post-Soviet space that merits more scrutiny outside of the confines of area studies. Rustamjon Urinboyev’s Migration and Hybrid Political Regimes: Navigating the Legal Landscape in Russia is the first – and much anticipated – full-length English-language ethnography of the everyday experiences of Central Asian migrant workers in contemporary Russia. The book is premised on the notion that Russia represents a fundamentally different kind of migration regime that cannot be adequately understood using existing theories on migrant integration and adaptation that have been developed in a Western context. Urinboyev is interested in exploring what happens when a nondemocratic – or “hybrid” – regime such as Russia develops into a major migration hub, particularly one where the distinction between legality and illegality appears to be purposefully blurred.

Based on extensive transnational fieldwork in Moscow and the Fergana Valley, the book documents the encounters of Uzbek labor migrants with employers, middlemen, law enforcement and family members back home while struggling to make a living in a rough-and -tumble Moscow. Urinboyev’s positionality as a fellow native of the Fergana Valley is part of what makes this book such an invaluable and rich resource as he is able to offer unparalleled ethnographic insight into the daily lives of people who may otherwise be apprehensive about speaking to researchers in a country where migrant workers are kept in a permanent and precarious state of semi-legality.

While most Central Asian workers are able to come to Russia in search of employment without a visa, once inside the country they are confronted with a corrupt, dysfunctional and opaque system of migration controls that is “driven more by informal practices than state law” (p.5). Urinboyev explores the strategies employed by Central Asian labor migrants to obtain work permits, avoid police harassment and push back against exploitative employers. Unable to access any meaningful form of legal support or migrant aid, Central Asian migrants are left with no choice but to resort to informal channels in order to get by in an inhospitable environment. This may include paying for the services of Chechen racketeers to collect back wages (Chapter 5), skillfully negotiating bribes with Russian law enforcement (Chapter 6) or exerting pressure on village elders back home to shame the families and friends of dishonest Uzbek middlemen who exploit their compatriots in Russia (Chapter 4). While these methods are risky and not always successful, according to Urinboyev they are part and parcel of a “parallel legal order” that labor migrants are forced to contend with in Russia (pg. 86).

One of the book’s main arguments is that this legal order based on informality, corruption and weak rule-of-law actually offers labor migrants opportunities to circumvent restrictions and overcome challenges. Urinboyev pushes back against the notion of Central Asian migrants as passive victims of an inhumane system, describing them instead as active agents who use the informal mechanisms at their disposal to endure in Russia’s shadow economy. Hailing from post-Soviet states with low levels of trust in government institutions and rampant corruption, Central Asian migrants find themselves embedded in a Russian legal environment that – while unjust and arbitrary in nature – is fundamentally recognizable and legible. This complicated system of informal networks incorporates a diverse set of mutually dependent actors: police officers, construction companies, recruiters, and – at the lowest rung – migrant workers. In the Moscow described in this book, Uzbek migrants encounter a world where rules are made to be broken and everything appears to be negotiable for the right price. The same cops who shake down migrants for bribes at metro stations can be hired by a disgruntled Uzbek construction crew to extract back pay from a disingenuous Russian employer.

The system of informal governance described by Urinboyev captures a particular aspect of Russia’s migration governance as it was experienced by male Uzbek construction workers in Moscow in the mid 2010s. As Urinboyev readily admits in his introduction, these experiences may not be representative of Central Asian migrants as a whole. Stories of migrant women, migrants living in the Russian provinces and migrants working in the service industry are notably absent. Since 2015, Kyrgyz citizens have enjoyed simplified access to the Russian labor market as members of the Eurasian Economic Union – a change that may have fundamentally altered their encounters with Russia’s migration regime.

Another point of critique is that the book’s emphasis on Russia’s weak rule of law has a tendency to downplay the power and capacity of the Russian state in terms of migration policy. Migrant workers are not just an illicit source of cash for corrupt Russian cops, but increasingly an important and relatively transparent source of fiscal revenue for regional governments who tax migrant workers via the so-called patent system. Similarly, Urinboyev’s assertion that “police officers are more interested in generating profit than deporting people” seems to be at odds with the fact that Russia’s deportation statistics have nearly tripled since 2011 (p. 107). Rule of law may be weak in Russia, but the state’s ability and willingness to detain, deport and ban migrants from re-entering seem to have only strengthened in recent years.

While one of the book’s stated aims is to develop a knowledge base on migration governance in hybrid regimes, Russia’s ongoing authoritarian consolidation seems to have taken the country out of that rather fuzzy category. Terminology aside, this book represents an important milestone in the study of Central Asian migration that will undoubtedly serve as a source of information and inspiration for future generations of migration scholars interested in studying migrant communities in non-Western contexts.

Yan Matusevich is a PhD student in anthropology at The Graduate Center, CUNY conducting research on how Central Asian migrants are reshaping rural areas in post-Soviet Russia. He is interested in the diversification of transnational labor migration networks between Central Asia, Russia, Turkey and South Korea.