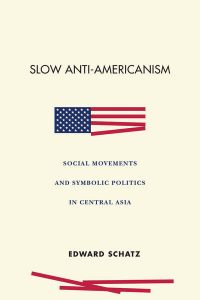 America’s foreign policy community has been experiencing an unprecedented crisis of confidence about democracy promotion abroad. In the wake of democratic erosion in the U.S. over the last fifteen years, the Black Lives Matter movement for racial justice in the summer of 2020, and the January 6, 2021 far-right insurrection at the U.S. Capitol; pundits are asking whether the U.S. can continue to play a global leadership role in democracy promotion as President Biden suggests, or should his administration instead turn its attention inward first? Biden’s appointments to key foreign policy positions reflect a renewed emphasis on human rights and a willingness to confront the U.S. history of hypocrisy that has so damaged its international reputation.

Those interested in reflecting on the recent history of America’s reputation abroad and what should be done differently in the future will want to read Slow Anti-Americanism: Social Movements and Symbolic Politics in Central Asia, by University of Toronto political science professor Edward Schatz. It takes readers far from the headspace of the foreign policy community and into the lives of activists and ordinary people in a part of the world where the reputation of the United States has changed greatly over the last 30 years, in response to both U.S. foreign policy decisions and the increasing availability of alternate points of view. Schatz argues that for Central Asians, perceptions of the U.S. have served as a resource that they deployed in their efforts to change their own societies. As for most people in the world, foreign policy really only matters as domestic policy.

Slow Anti-Americanism shows how the changing nature of “symbolic America” allowed different political and social forces at different times to draw on narratives about human rights and democracy, to point out U.S. hypocrisy, and to draw on conspiracy theories about the U.S., all to promote their cause. Symbolic America was far from the only resource these groups deployed against each other (and in chapter 4, Schatz shows that some groups like labor activists never found America relevant for their framing at all) but this book shows why this resource mattered in the recent history in Central Asia.

The heart of Schatz’s argument comes in chapter 3 where he contrasts the way that the changes in symbolic America affected two different movements: the Islamic Renaissance Party of Tajikistan (IRPT) and professionalized human rights organizations. In chapter 2, Schatz shows how increasing anti-American public opinion was used by Islamist groups to expand support for their views, but that broad-based Islamist groups who were more sympathetic to the U.S., such as the IRPT, “increasingly stood on shaky discursive ground” (p. 65). Offering a platform drawn both from Islamic values and human rights ideals emphasizing freedom of conscience and multi-party elections, the IRPT suffered immediate consequences of the rise of anti-Americanism and was subsequently repressed practically out of existence. Similarly in Kyrgyzstan, Schatz traces the political environment in the 1990s and early 2000s which was very intertwined with Western democracy promotion activities and pro-U.S. public sentiment, through the ouster of President Akaev in 2005 when the democracy tropes of symbolic America were deployed to bring President Bakiev to power, and then to Bakiev’s ousting in 2010 when symbolic America was no longer useful and the movement drew on tropes of corruption and economic woes instead (p. 77). Interestingly, in some ways this narrative shift from democracy to governance concerns may have actually tracked with changes in U.S. democracy assistance, which increasingly funded governance improvement projects in countries like Kyrgyzstan, where human rights and fair elections were seen as too distant a goal.

In contrast to these broad-based political movements, the human rights movement in Central Asia suffered only gradually from the growth of anti-Americanism, in part because donor support and transnational networks had cultivated a cohort of professionalized advocates who were less dependent on popular opinion. Symbolic America changed how these organizations were viewed by the public, however, moving from mysterious but benign sources of white collar income in the 1990s and early 2000s, to agents of foreign influence that had the potential to erode national sovereignty after about 2003. Still, because these organizations targeted narrow issues, they have remained at least marginally effective at deploying a positive framing of liberal values in their local contexts and have managed to hold leaders accountable for some of the more egregious violations of their own ostensibly liberal democratic constitutions.

So what is to be done by those who care that symbolic America be effectively deployed for the cause of democracy and human rights? Schatz provides a compelling answer to that question based on his own research, one that dovetails with similar findings elsewhere: the messenger matters more than the message. A person’s propensity to believe a fact depends a lot on their prior beliefs and their trust in the person presenting the fact. Schatz concludes that public diplomacy should focus on supporting credible messengers. However, in addition to working with more credible messengers who speak local languages and understand the context, the U.S. must also work on its hypocrisy gap. In the age of “active measures” and disinformation campaigns, any messenger’s credibility can so easily be undermined just by tying them to the U.S. — when someone’s prior beliefs are that the U.S. is suspect. So again, we return to the importance of the long, slow task of building up peoples’ prior beliefs about the U.S. which requires that the U.S. consistently be good in the world and at home, rather than just persistently telling the world that it is good.

Laura Adams is an expert on international development, politics and civil society in Central Asia. Follow her on Twitter @lauristan.