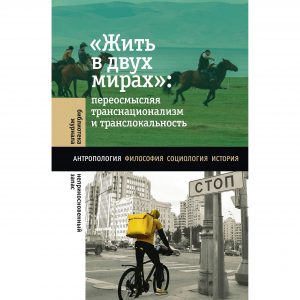 Central Asia remains one of the most migration dependent regions in the world. It is no surprise then that when borders closed and lockdowns came into place in the wake of Covid-19, this part of the world was struck particularly hard. During the pandemic, migrants from Central Asia were frequently in the news. As borders closed, thousands of migrants were stuck on the Russian-Kazakh border. With many unable to work during lockdowns or not able to travel to Russia, remittances plummeted during lockdown before rapidly recovering as migration restarted.

For those interested in the daily lives of Central Asian migrants in Russia and in-country migration more widely, the edited volume Жить в двух мирах: Переосмысляя транснационализм и транслокальность  (Living in Two Worlds: Rethinking Transnationalism and Translocality) by Olga Brednikova and Sergei Abashin is a valuable resource. The edited volume provides the reader with a timely in-depth ethnography of migration processes, drawing attention to the everyday practices of migrants, their strategies for adapting to changing realities, as well as migrants’ hopes for the future and aspirations. Each chapter offers a unique insight into topics such as the flow of people, identity, goods, money, information, ideas, imagination, and infrastructure across borders.

The theoretical basis for migration processes is based on transnationalism as a phenomenon of expanding social space beyond geographical, cultural, and political boundaries. The authors claim that this aspect of transnationalism ‘turns’ related to migration has not previously been discussed in Russian-language scholarship, and as such, this is considered to be the first attempt to apply these concepts in Russia. Although the title includes the concept of translocality, which captures the way migrants live lives rooted in multiple locations, only a few chapters briefly deal with this concept. The rich ethnographic material of this book shows that migration processes are not a unilateral phenomenon, but a bilateral one; people live in two or more places at the same time, maintaining economic, social, symbiotic, political and cultural ties in both places simultaneously. In other words, they extend their lives beyond national boundaries and orient their lives taking both places into account.

The contributors to this edited volume are researchers of transnational migration from different disciplinary backgrounds including sociology, ethnology and anthropology. The combination of scholarship by Central Asian, Russian researchers, and Western colleagues makes this edited volume balanced, rich and wide-ranging. This interdisciplinary and collaborative approach aims to overcome academic colonialism (or  hierarchization of  scholarships) by jointly covering and exchanging different academic viewpoints and research methods.

Another strength of this volume is that the research was conducted through multifaceted ethnographic fieldwork, interviewing people in both the host country and country of origin over an extended period of time, both to observe their lives in light of the changing economic situation, as well as noting the effects of tightening migration policies. In addition, the extended research period allowed researchers to further explore the connections, networks, and practices that unite different places.

At the heart of this edited volume, Жить в двух мирах, is the desire to show the specifics of transnationalism in the Russian context. The authors claim that ‘migrants face a number of challenges on a daily basis, including dealing with the economic crisis and decline in the value of the ruble, changes in migration policy (in particular, mass deportations of migrants and entry bans), the introduction of a new patent (license) system, and an increase in domestic xenophobia. It highlights how as the scale of migration decreases, some migrants are forced into the shadow economy and must violate the  rules for staying in Russia because of the high cost of patents (licenses) (p.9).

The instability of migration raises interesting academic questions, bringing into focus the rapid adaptation of migrants to new realities. It highlights how on one hand the migrants make sense of their everyday life in meaningful ways, whilst on the other hand it reveals the precariousness of their legal status and their necessary circumvention of legal, economic and political constraints in very creative ways.

The conceptual introduction  is provided by Kapustina and Borisova. They provide an overview of transnationalism and translocality citing the main existing literature in the English language covering different trends in migration studies. The second chapter is by Abashin, who provides an overview of the history of migration from Central Asia to Russia, covering both the Soviet period and migration after the collapse of the Soviet Union. Both sections provide essential background for the volume and are especially valuable to scholars wishing to study migration theory in its broader historical, social and political context.

The rest of the edited volume is organized into six sections: In the first section “Living in Two Worlds,” Reeves and Brednikova explores how migrants have to work, live, and strategize under unstable situations by living in two worlds, dealing with the challenges of both the host country and country of origin, and making sense of their lives in morally acceptable ways.

The second section “Transnational Family” covers two interconnected research projects by Aitieva and Borisova, in which they describe the transnational life of migrants through the lens of women and children in migration as well as back home. The focus is mainly on the agency of the women and children involved, and their active participation in the process of care, provision and normalization of mobility.

The third section deals with “Transnational Identity” with contributions by Nasritdinov, Rahimov and Alekseeva. The first two authors examine the civic identity of Kyrgyz migrants and argue that the government’s unsupportive attitude toward its own migrant citizens contributes to the transformation of the concept of home. This leads to Alekseeva’s research on Pamiri Tajiks’ ideas about the future of home and examines how their plans change depending on the political and economic situations.

In the fourth section articles by Abashin and Peshkova address the circulation of material culture as one of the socially important aspects in the lives of migrants and show how they connect two places. With the flow of things, one can also observe how material objects (i.e. gifts, souvenirs, automobiles) are also active participants in social processes; they have their own life that includes not only the physical realm, but also emotions, experiences, and perceptions that arise in the intersection of objects and subjects. Gift giving, for example, signals reciprocity and reinforces social bonds.

The fifth section studies transnational and translocal infrastructure. Deminitseva and Kashnitskiy analyze the emergence of Kyrgyz clinics in Russia, while Kapustina’s text is based on translocal social networks and rituals among Dagestanis in Siberia. The final section is devoted to aspects of “transnationalism and new communication technologies,” focusing on ways in which cell phones and other technologies are increasingly connecting both host country and country of origin. According to Urinboyev, the idea of the mahalla (neighborhood) is being revived thanks to cell phone use which acts as a regulatory mechanism between the migrant and their place of origin. Kasymova provides an analysis of the telephone conversations of different generations within the transnational families. She explores not only the exchange of information, but also the reception into families, the psychological therapy of migrants and strategies for overcoming distance.

The volume is an excellent resource for anyone who wants to understand the processes and dynamics of Central Asian migration, as well as the lives of migrants in Russia. This is a well-timed and indispensable contribution to migration studies in Central Asia and Russia; this book belongs in every institute/university/organization with a focus on migration.

Aksana Ismailbekova is a research fellow at Leibniz-Zentrum Moderner Orient (ZMO), Berlin. She is author of Blood Ties and the Native Son: Poetics of Patronage in Kyrgyzstan (University of Indiana Press, 2017).