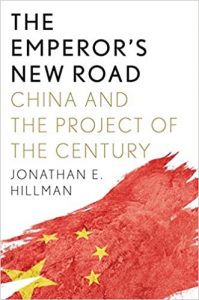 The short story by Hans Christian Andersen entitled, “The Emperor’s New Clothes” describes a vain emperor duped by swindlers who convince him to pay lavishly for an outfit magnificent to behold but invisible to the disloyal and incompetent eye. Not wanting to reveal themselves as inept or disloyal, all the royal advisors and subjects play into the ruse by feigning awe as the Emperor parades around town, chin proudly upturned, fully exposed in his birthday suit. Jonathan Hillman’s book The Emperor’s New Road: China and the Project of the Century evokes some parallels between China’s leadership and the fabled Emperor: namely, a yawning gap between overstated propaganda and hype surrounding the project, and tangible outcomes on the ground. But the book’s title functions more as a clever hook than a snapshot true to the view of the BRI Hillman presents.

In a growing sea of hot takes on China’s global rise, The Emperor’s New Road offers a highly digestible but complex portrait of the BRI. The opening chapter lays out its origins and the challenges to defining the still unfolding BRI and, instead of settling on one, describes the various ways it is interpreted – as a beast of burden, a golden goose, a trojan horse, and a white elephant – depending on the observer’s perspective (p. 5-6). Despite evoking an image of China as an aspiring empire, it breaks from overdone, alarmist portrayals of the BRI as an (either doomed-to-overreach or menacingly advancing) imperial quest by China, asserting instead that “this is not a story about China’s domination but its education as a rising power” (p. 8).

That emphasis on China’s rise as an evolving process of lessons learned is served by the structure of the book, which juxtaposes the BRI with comparable projects of the many global powers which preceded China. It starts with a history of infrastructure as an appealing technology for asserting global power but also a double edged sword, presenting examples of imperial overreach by France (the Suez Canal), the United States (the transcontinental railway), and Great Britain (a global network of telegram lines) as precursors to China’s approach. The book then proceeds region by region along the BRI, from Central Asia, through Europe, to Southeast and South Asia, ending in Africa, making apt comparisons between BRI investments and both historical and current day parallels forged by other countries. Some examples – Britain’s takeover of Hong Kong and its heavy-handed efforts to construct railways in Qing ruled China in the 19th century, for example – point specifically to the irony both of Western critiques of China’s current infrastructure-led global mission and to current day Chinese officials’ failure to foresee and understand pushback from host countries. Other examples consist of BRI projects established atop other powers’ past projects, such as the China-Pakistan Economic Corridor, China’s Belgrade-Budapest railway, and Kenya’s Chinese sponsored standard-gauge railway. In each case, the struggles Chinese implementers face seem more understandable when they parallel the struggles of other global powers in the past, while also suggesting that China too often fails to learn from the failures and shortcomings of other investors who came before.

This establishes a consistent theme of understanding the gap between the lofty ambitions of BRI projects and the potted track record of success on the ground, not solely as a reflection on Chinese actors’ capacity to execute projects or of host country resistance to Chinese interventions. Rather, it points to the contradictions inherent in a long-standing fetishization by world powers of infrastructure as a technology of connectivity and control. Large infrastructure projects have been touted as symbols of a regime’s power, of the ability of leaders to bend geography, control territory, and drive human progress forward throughout history. But from railways to communications technology, infrastructure expansion is undertaken at considerable political and material costs and has served both to extend and erode sovereignty.

Hillman focuses not only on China and other global powers, but also on the recipient countries in a refreshingly nuanced manner. His use of rich personal anecdotes of travel along the BRI gives the text an enjoyable pace and texture and establishes his credibility as a witness to and conveyor of a more complex story. These anecdotes also serve his stated aim of demonstrating how projects play out on the ground and giving a human face to the varied stakeholders involved – a level of detail often absent in accounts with the geographical scope he provides. They are also used to transition the reader into host country perspectives. In the author’s visit to the Hambantota Port, the poster child for accusations that Chinese investments amount to debt trap diplomacy, he observes an impressive headquarters building staffed by Chinese laborers as well as celebratory portraits and plaques of Rajapaksa, the Sri Lankan president who tethered his political rise to the construction of the Port. These grand representations contrast a quiet, largely empty port below. This leads into his portrayal of the project as an ill-conceived and devastatingly wasteful personal vanity project of the former Sri Lankan president enabled in part by irresponsibility and shortsightedness on the side of the Chinese developers. Though the port was eventually transferred into Chinese hands, Hillman deems the project a financial and reputational disaster for China and concludes that the debt-trap narrative “minimizes Sri Lanka’s agency, which is where responsibility and solutions ultimately lie” (p. 166). Other examples of recipient country decision-making break the stereotype of corrupt politicians which the Sri Lankan example may play into. These include the fascinating case of the Ethiopian government’s engagement with competing Chinese telecom firms and the careful approach Central Asian leaders take to playing Chinese, Russian, and international financial institutions’ interests in the region’s resources and strategic military position against each other to their own advantage.

The Emperor’s New Road communicates two important aspects of the BRI which this reviewer believes get short shrift in mainstream portrayals. First, it refuses to exoticize, simplify, or dramatize China’s rise as a threat or historical anomaly, instead placing the BRI in a longer history of rising powers and a global obsession with infrastructure as a technology of power. This point is presented, justifiably, as both a pushback against the BRI’s critics and a warning to its proponents. In his preface Hillman writes that “While the United States mostly complains these days, China is forging ahead” (p. viii) and acknowledges a genuine commitment by China’s leaders to export the tools of development it has itself developed through. Still, he warns that whether the BRI will add or detract from China’s global standing depends on its ability to learn from others’ past mistakes. Second, the book balances a focus on global powers with the perspective of host countries. “Far from being pawns,” Hillman writes, “smaller countries are often the most pivotal players. Many of them have far more recent experience dealing with outside powers than China has acting as one” (p. viii). Thus, China’s education as a rising power consists also of learning to navigate local structures of power and patronage in recipient countries, and critics who portray the BRI as a Chinese takeover must recognize the ways host country actors manipulate foreign investments to their own ends.

Ultimately, the book offers valuable insights for both general audiences and seasoned China watchers. These insights are delivered in a richly detailed and highly enjoyable format replete with catchy turn-of-phrases (e.g. labeling China’s approach to multilateralism in Europe ‘flatteralism’) and eyeroll-worthy but nevertheless fun and fitting headings (from ‘Empire Strikes Back’ to ‘Game of Loans’). In the tale of “The Emperor’s New Clothes,” an earnest little boy finally shatters the ruse, exposing the Emperor’s magical outfit as nonexistent despite the performed awe of all other onlookers. We can loosely interpret Hillman’s book as serving a similar function, but he depicts the BRI as far more than a hollow set of proclamations or a strategic deception. Instead, he portrays it as a hugely significant global project, but one riddled with complexities and contradictions and shaped not only by Chinese interests but a host of other factors. The Emperor’s New Road thus constitutes an excellent resource for understanding the varied manifestations of China’s global integration at multiple levels and across different regional contexts.

Juliet Lu is a Postdoctoral Research Fellow at the Cornell University Atkinson Center for Sustainability in the Department of Global Development and a co-host of the Belt and Road Podcast. Her research examines the political ecology of Chinese agribusiness companies’ investments in Laos, primarily in rubber plantations. Follow her on Twitter @_JulietLu.