The Promise of the Korea-Uzbekistan Free Trade Agreement

The Promise of the Korea-Uzbekistan Free Trade Agreement

Last year, even in the midst of a global pandemic, Uzbekistan held several conferences and talks with Korea regarding a potential Free Trade Agreement (FTA). So far, Korea has been pushing more strongly for the agreement, but Uzbekistan would actually stand to benefit the most from free trade.

The two countries have numerous avenues for cooperation. While Korea is abundant in both technology and capital, Uzbekistan relies primarily on its resources and cheap labor supplies. Seoul has an outsize influence on Tashkent, being its third-largest trading partner after regional powers Russia and China. In 2019, trade between the two stood at $2.4 billion USD, swelling by 10 percent the following year. The total volume of investments in Uzbekistan by the Republic of Korea has exceeded $7 billion USD so far.

South Korean President Moon Jae-in has prioritized trade liberalization as part of his strategy to engage with the wider region. The Regional Comprehensive Economic Partnership (RCEP), a free trade deal signed by 15 Asia-Pacific countries in November, was a significant achievement of his New Southern Policy aimed at strengthening ties with countries of the Asia Pacific. The FTA with Uzbekistan would be a tangible accomplishment within the framework of the New Northern Policy, aimed at developing relations with Russia, Central Asia and Mongolia.

What Does it Promise?

The Korea-Uzbekistan FTA promises to benefit both countries. Seoul will be able to diversify its export portfolio, a task that has proven vital amid growing tension between the United States and China, which jointly account for nearly 40 percent of Korea’s exports. To relieve its heavy trade dependency on these countries, Seoul plans to expand its trade network to cover 70 countries by the end of 2022. Korea also hopes that Tashkent will cooperate with Seoul to ensure South Korean companies play a critical role in infrastructure projects as the Uzbek government pursues modernization. 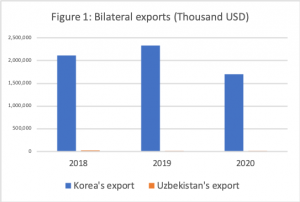 Uzbekistan benefits significantly more from the agreement in the short-term, and so the Uzbek government should be more active to accelerate it. In 2019, Korea exported $2.3 billion to Uzbekistan while only $19.7 million of goods flowed the other way (Figure 1).

To avoid a growing trade imbalance, export promotion plans should be developed. Uzbekistan has a number of advantages in this area, with its agricultural products positioned to perform well. Considering Korea as the third-largest food market in Asia-Pacific and the fifth largest globally, Uzbekistan should see this as a window of opportunity. Lower tariffs due to the FTA will improve the competitiveness of Uzbek agricultural goods in Korean markets. 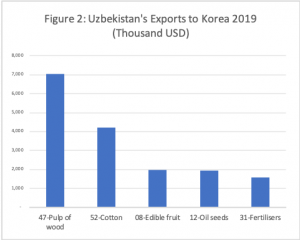 Currently, Uzbek farmers are paying costly tariffs at the South Korean border relative to major competitors. For instance, Uzbek exporters of pomegranates or melons are hit with the most-favored-nation tariff rate of 45 percent. U.S. farmers face only a 4.5 percent tariff rate in contrast, due to the longstanding U.S.–Korea FTA. While countries with an FTA with Korea do not pay tariffs on cherries, Uzbek exporters pay 10 percent on them. The need for a trade deal is becoming increasingly urgent as Uzbek farmers find themselves progressively shut out of Russian markets and Uzbekistan seeks to ease its heavy reliance on the Russian market as a final export destination.

Considering Uzbekistan desperately desires increased investment, the trade deal has the potential to increase investor confidence of Korean businessmen who remain hesitant despite President Mirziyoyev’s promises of special treatment for Korean investors during his official visit to Seoul. Investment from Korea would not only finance infrastructure, but also provide desperately needed jobs for Uzbeks.

There are 461 enterprises with South Korean investments, including 386 joint ventures and 75 enterprises with one hundred percent South Korean capital. These enterprises successfully operate in the oil and gas, petrochemical and chemical, mechanical engineering, electrical and textile industries, information and communication technologies, transport, logistics, and tourism. The Korean Agency for International Cooperation and the Export-Import Bank of South Korea are implementing several projects. Large Korean corporations such as Samsung and LG are creating joint ventures in Uzbekistan. In particular, Samsung, together with the Artel company, arranged the production of household appliances.

If Uzbekistan succeeds in including a labor-related chapter in the agreement, it will ease the unemployment burden. South Korea, which has one of the world’s fastest aging populations, needs younger laborers for its industrialized economy, while Uzbekistan – the most populous nation in Central Asia – desperately seeks to tackle its chronic unemployment. Currently, Russia is the final destination for the majority of Uzbek migrants, but Korea has become a growing destination for Uzbek migrants with 5,295 work permits issued to migrants in 2019, up from 3,617 three years before.

If an agreement is reached, Uzbekistan would be the first former Soviet republic with an FTA with Korea. Also, it would be the first deep trade agreement that Uzbekistan has ever signed. For Uzbekistan, the benefits outweigh the costs. Considering Moon’s presidential term slated to end in 2022, there is a need to push ahead with the negotiations and get the deal squared away.