Producing a work like Scott Levi’s The Bukharan Crisis ought to be a mandatory service for every senior historian upon completion of their second monograph: a concise, rigorous, synthetic intervention that crystalizes key insights from an established career of research within the context of larger issues in the field. It does not represent new primary research, as the author emphasizes explicitly (p. 3), nor is it a narrative history of eighteenth-century Central Asia. Rather, it is more of a “think piece” in book form, which allows Levi the room to explore the nature of “decline” and Eurasian overland trade in the early modern period. The end result of this meditation is one of the very few works to put recent research from Central Asian studies in dialogue with scholarship on world history, from maritime trade and climate change, to technology and orientalism.

Levi’s impetus for writing this book is Central Asia’s incarnation of the debate over the “decline paradigm” common to Mughal and (especially) Ottoman studies. The origins of the decline narrative are no mystery: over the course of the eighteenth century, Central Asia’s political landscape fractured and witnessed multiple dislocations of people. Levi is well aware of this fact; much of the work is spent explaining the political crisis (which is in the very title, after all). But he also marshals considerable evidence of expanding overland trade during this same period, which leads him to ask: what does Central Asia’s increasing connectivity during this same period mean for our understanding of the idea of decline more broadly? Occasionally, one can hear groans amongst Central Asianists that this decline debate grinds on. But one can hardly complain if debates among historians lead to studies such as this one, which serve as a platform for reaching far beyond the boundaries of the original debate. 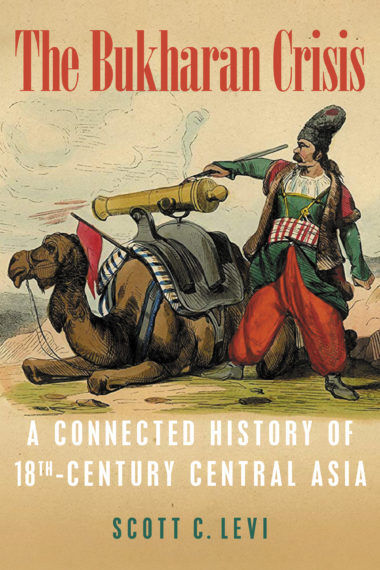 Despite the specificity of Levi’s core question, the topics covered in the book’s four chapters are quite diverse, and some read like mini-treatises that could easily be extracted and assigned individually in the classroom. Chapter 2 may now be the single best go-to essay on the idea of the Silk Road, in that it assembles the foundational scholarship about the origin of the term (e.g. Richthofen and his successors), synthesizes it with the now sizable literature on Russian orientalism, and uses it to pick apart recent popular histories that rely on the concept (e.g. Fred Starr’s Lost Enlightenment). Levi is not so much interested in retiring the term “Silk Road” as emphasizing that it should not be understood as limited to ancient history (p. 38). Chapter 3 is my personal favorite, weaving together Levi’s own research on Indian merchants with similar studies on trade networks in the Russian Empire as well as representative findings from China and the Indian Oceans. I suspect this chapter will become a staple of world history classes. Meanwhile, Chapters 1 and 4 are of a kind, the first setting up the decline debate, and the latter assessing it in light of the intervening chapters, complete with excursus on military technology and environmental science.

If this work is primarily historiographical in nature, does that mean that readers already familiar with the underlying studies will have little to gain from this book? Hardly. At times, The Bukharan Crisis can feel almost like a remix, in a good way: the author/DJ revisits some of the greatest hits in Central Asian studies, but by mixing them with other melodies the reader/listener gains entirely new insights from the older material. For instance, Levi returns to Thomas Welford’s account in his Four Types of Loyalty of recurrent famines in the seventeenth century, but after having spent ten pages summarizing scientific literature on the Little Ice Age unfolding during this exact same time period (p.150). In another representative instance the author places Erica Monahan’s recent work on Siberian merchants in dialogue with the burgeoning field of Indian Ocean studies, thereby reframing, and recentering, the region in between (ch. 3).

Levi is admirably precise in the claims he makes and guarded against overreach. For all the strengths of world history as a field, few scholars have asked “was there connectivity?” and reached a negative finding. After all, connectivity is always relative: compared to other regions? Compared to earlier time periods? Perhaps Levi’s most surprising conclusion (drawing especially on findings by Jos Gommans and Om Prakash respectively) is that not only did Central Asia’s overland trade continue to scale up in the early modern period, it possibly even surpassed that of the Indian Ocean during the same period in terms of value of goods exchanged (pp. 111-118). Conclusions such as this certainly go a long way toward the book’s stated aims of challenging preconceptions about Central Asia’s isolation and stagnation, even as Levi is careful to emphasize that the larger picture also included political collapse and involuntary decentralization.

I am in no way qualified to assess the economic data unearthed to substantiate these surprising findings, which rely on imperfect figures (as Levi emphasizes) and sometimes hinge on murky distinctions between “intra-Asian” and “overland.” But they do prompt some additional big picture questions of the very sort Levi engages in this book. For instance, if the Eurasian overland trade surpassed that of the Indian Ocean in terms of value, why was Russian Turkestan a money-loser until 1909? The British built an empire on which the sun never set in part by squeezing India for everything it was worth, yet Alexander Morrison’s forthcoming study (The Russian Conquest of Central Asia, Cambridge University Press) emphasizes that great power rivalry drove Russia toward the conquest of Central Asia despite the lack of obvious financial gain. Was it simply a matter of the later onset of colonialism in the Russian case, or was Russia for some reason unable to capitalize on the economic powerhouse brought under its control?

Coming from a different angle, Levi emphasizes that this connectivity was not just commercial: the same networks bound Central Asia up in the exchange of ideas as well (p. 170). Why, then, did so many of those ideas seem to reach Central Asia last? For instance, Islamic reformism emerged in its Central Asian incarnation (Jadidism) around the turn of the nineteenth century, trailing its antecedents in the Volga Urals and the Ottoman Empire by decades. The first dedicated Persian newspaper appeared in Bukhara in 1911, over half a century after its counterpart in British India. The frenetic cosmopolitanism that comes through in a work like Nile Green’s Bombay Islam feels very different from the enduring high Persianate culture one finds in Bukhara during the same period. These questions are less criticisms than musings on where the path set by Levi might lead future studies of a similar nature.

The readership for this work will be justifiably broad. Non-specialists (particularly those invested in world history) will find the best work coming out of Central Asia translated into an accessible framework. Central Asianists will be challenged to reengage established research in new ways. If we are lucky, other scholars will follow Levi’s model of alternating between research monographs and think pieces such as this one.

Tags: Book Reviews
SearchPostsLogin
Resources for Understanding Events in Kazakhstan
Tatarstan’s Paradiplomacy in Central Asia
The Critical Mass Reports on “Contaminated Trust” during the COVID-19 Pandemic
“Your Family Will Suffer”: How China is Hacking, Surveilling, and Intimidating Uyghurs in Liberal Democracies
Event Summary: Analysis of the Uzbek Elections
Understanding Pushback against China’s Belt and Road Initiative