Anti-Semitism and Orientalism in German-language Travelogues of Turkestan

Anti-Semitism and Orientalism in German-language Travelogues of Turkestan 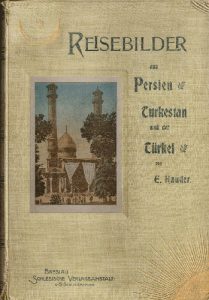 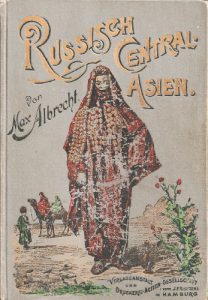 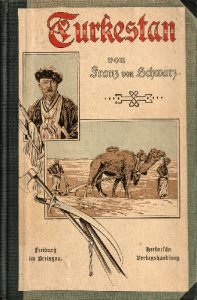 In the German language accounts of Central Asia from the end of the 19th to the beginning of the 20th century, one finds many different descriptions of the region by well-known authors such as Hermann (Arminius) Vámbéry (1832-1913), Wilhelm Radloff (1837-1918), Gustav Radde (1831-1903) or later Wilhelm Rickmer-Rickmers (1873-1965). Their Orientalist tone of these writings make them a difficult read for a modern audience.

Few academics have examined the German-language accounts of the region. But Bahodir Sidikov, assistant professor at the Institute of Islamic Studies and Modern Oriental Philology at the University of Bern, has analyzed the German construction of the Oriental Other in his doctoral thesis “Eine unermessliche Region. Deutsche Bilder und Zerrbilder von Mittelasien (1852-1914)” (An Immeasurable Region. German Concepts and Distorted Narratives of Central Asia) completed in 2003. In doing so, he addressed a gap in Edward Said’s analysis. Said was accused of having neglected Russian and German discourses on the East in his work.

Sidikov’s central finding is that German travelers were astonished to discover that the Bukharan Jews differed substantially from the Jewish communities they were familiar with from Europe. But nonetheless they carried with them much of the anti-Semitism which was prevalent in Germany at the time, reproducing popular tropes, such as the expectation that the Jewish community would dominate banking. But as Vámbéry, who was himself of Jewish origin, reported, Hindus and other traders from India were dominant in finance across the region.  Vámbéry repeatedly describes the Indians as ‘shifty’ and ‘stingy.’ For the city of Bukhara, he notes for the time before the Russian conquest that the coloring of silk fabrics was almost exclusively in the hands of the Jewish community. Franz von Schwarz reports that one could “already see their profession by their constantly blue hands” (von Schwarz 1900, p. 441). The fact that the Bukharan Jews in the city of Bukhara are more concerned with handicrafts than with trade earns them sympathy from German travelers, while other ethnic groups are denigrated: According to Franz von Schwarz, the Sarts, Uzbeks and Persians were considered superior to the Jews “in dexterity and cunning” in trade. The Swiss traveler Moser describes Indians as “money-grubbing vultures” who are full of contempt for the exploited country (Moser 1888, p. 803).

After the Russian conquest of Central Asia, Ashkenazi Jews from Eastern Europe and the European part of Russia emigrated to Turkestan. This led to the formation of parallel Jewish societies. The newly-arrived immigrants worked in familiar professions such tailoring and shoemaking, but were also active as moneylenders. Sidikov uses several examples to show how the German authors make use of racist stereotypes:

“Concerning the national character of the Bukharan Jews, they distinguish themselves (…) from many of their European fellow tribesmen just as advantageously as by their physical type, which is already expressed in their nobler and more intelligent facial features. There is no trace of the arrogance, impudence (…) and importunity and great filthiness of the Polish Jews to be found among the Bukharan Jews. They are just as clean as the Sarts, at the same time exceptionally modest and polite, and on the whole, make a more sympathetic impression than the Sarts and Uzbeks” (von Schwarz 1900, p. 442).

The Russian government, merchants and industrialists often regarded the Bukharan Jews as partners who had crucial local knowledge and were helpful as facilitators in the markets of Central Asia and the neighboring states (Kauder 1900, p. 263; Radloff 1884, p. 446). Industrialist and businessman Max Albrecht explains this circumstance in detail, although at the same time, he seems to feel it necessary to emphasize that all the other peoples of Central Asia had an aversion to Jews because they had a “smell peculiar to them, (…) most unpleasant” (Albrecht 1896, 443f.; cf. Kauder 1900).

Bahodir Sidikov highlights an excerpt from a report by Wilhelm Radloff that shows the stereotypical ambivalence between conquerors and conquered:

‘The Jew, who in Europe has lived for centuries in enmity with the Christian, welcomes him here with a shining gaze (…) and is delighted to be able to wave a greeting to him. He proudly regards him as his new friend, his protector. In his proximity, he looks down on the Mohammedan with contempt.” (Radloff 1884, 446)

Using the example of whether Jews in Bukhara, Samarkand or Tashkent would have lived in ghettos comparable to those of Europe in the Middle Ages, Bahodir Sidikov shows how European concepts are transferred to Central Asia by German travelers. After all, they try to describe Jewish neighborhoods as closed spaces enforced by the authorities. The term ghetto only appears in the writing of Herrmann Roskoschny (1884). Still, many authors emphasized that the Jews of Central Asia would live a miserable and despised life in enclosed city quarters under the rule of the Emirs. Heinrich Moser’s description is exemplary:

“On the streets, you see them creeping modestly along with the houses. They wear shabby clothes made of cotton fabric because they are forbidden to wear silk. They are also forbidden to ride horses. They tie a rope around their bodies. (…) Among these miserable-looking people, some own houses in Tashkent. The main reason why they do not all emigrate is their desire for profit”(Moser 1888, 138).

But the situation was much more complex. A large proportion of the Jews of Central Asia had already undergone various waves of forced public conversion to Islam in the 18th and early 19th centuries, but at the same time still practiced Jewish life in private. With the Russian conquest, there were again waves of re-conversion and the arrival of immigrant Ashkenazi Jews.

There is more to discover in German travelogues than merely anti-Semitism and Orientalism. Since the second half of the 19th century, the Russian conquests made Central Asia accessible to German scientists, technicians, traders and explorers, so it is not surprising that they adopted the Russian colonial perspective which set Slavs above the Muslim and Jewish populations of the region. They accordingly criticized obstacles to colonial modernization. Wilhelm Rickmer-Rickmers in his lecture “Impressions of the Duab (Russian Turkestan)'”(1907) to the Central Asian Society is a perfect example for this attitude. His sympathies belonged to both the Russian and English colonial projects, both governments he relied on to finance and organize his projects. Accordingly, he praised the superiority of the two European civilizations. At the same time, however, he denied Central Asia’s inhabitants any ability to achieve higher cultural goals (cf. Scharr 2009):

“Take away the hand of a good ruler, the main irrigation canals will run dry, and the great public buildings will crumble; the Sart and his work return to what they were – dry mud (…). He can work, when he must; he can work very hard, and then sits with vengeance. (…) And he really loves work – that which other people do for him.”

He was of course wrong.

Stefan Applis is an Assistant Professor of Geography and its Didactics at Westfälische Wilhelms-Universität Münster (Germany). His Twitter is @doinggeography. Together with Shavkat Boltayev, a documentary photographer from Uzbekistan and founder of the Bukhara School of Photography, he is working on a book of Boltayev’s photographs from a 20-year documentary project on Jewish life in Bukhara.

Lewis, Bernhard (1982b). The Muslim Discovery of Europe, New York-London.

Kurt Scharr (2009). An Image of Foreignness: The German-Austrian Alpine Club and its 1913 Turkestan Expedition. Central Asia Journal No. 67, http://asc-centralasia.edu.pk/old_site/Issue_67/02_Kurt_Scharr.html#_ftn2