Polymaths of Islam: Power and Networks of Knowledge in Central Asia

Polymaths of Islam: Power and Networks of Knowledge in Central Asia

James Pickett’s Polymaths of Islam: Power and Networks of Knowledge in Central Asia is a welcome addition to Central Asian Studies – a field that appears to be perpetually on the margins. Both well-researched and richly sourced, this addition to regional scholarship looks set to inspire further scholarship in future with its sharp observation on the power of elite religious scholars (ulama) over the development of Bukhara.

The central inquiry is one concerning the role of knowledge in the social, economic, political, and even psychological development of civilization. Equally important, this volume draws attention to the participation of non-Muslims in this process, revealing the intricate networks and exchanges across social and religious divides. Beyond Central Asian studies, Polymaths of Islam will be a vital source for students of the Middle East and beyond. 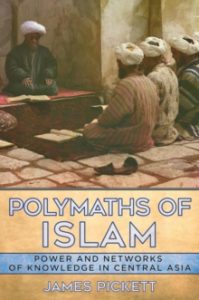 Pickett also does a remarkable job of identifying the complexity of the polity of Bukhara. The scholars Pickett has chosen to study were typically fluent in three languages – Arabic, Persian, and Turkic. They spent at least a decade becoming what the author defines as a “polymath,” those with an “authoritative command over many different forms of knowledge – from medicine to law to epistolography and beyond – allowed to accumulate substantial power (p.2).” In the words of the author, Jews, Zoroastrians, Hindus, and Christians “reproduced and re-enforced a cosmopolis that intrinsically embraced a larger, Islamic “shadow” cosmopolis (p.35).” To give an example, the literary works done in Judeo-Tajik, which uses the Hebrew script to produce writing in Tajik, was almost identical in terms of style and genre to the works of Muslim authors. The author’s inclusion of Zabiha’s Poetry is an excellent example in which the late eighteenth century Jewish poet from Samarkand combined Persian, Islamic mystical, and Jewish elements to produce a unique poetic voice (pp.36-37).

In sum, the author’s comprehensive coverage of not only Muslim, but also non-Muslim intellectuals makes it all the more illuminating for those who seek to learn more about the city of Bukhara and its diverse mix of faiths and professions.

Pickett explores the ways in which the Persian language deeply penetrated into local religious and cultural productions and practices while preserving their distinct texture. The scholarship does have gaps however, most evident in its exclusion of certain important works produced in Arabic or Turkic. Tatimat al-Yatima and its coverage of the city of Bukhara by the famed Arab traveler as-Sa’alibi, is but one example, of a source which could offer an Arab perspective on the city. Furthermore, the employment of literature and scholarly works done in Turkic, including in Uzbek, focusing on the city of Bukhara by well-known scholars such as Bo’riboy Ahmedov or Ismatulla Abdullayev, could have improved the completeness of the picture of early modern Bukhara offered in the book.

Despite these minor shortcomings, Polymaths of Islam successfully unpacks its ultimate line of inquiry, that is, whether these Bukharan religious elite scholars were loyal to the rulers in whose realms they resided, or to Islam. The author states that these scholars were not dedicated to one ruler but became their own men. At the same time, such elite religious scholars were pillars of the emirates in which they served. The rulers of the Central Asian region relied on the expertise and knowledge of such Muslim scholars, who wielded substantial amount of influence, power and authority in many areas of everyday life.

Rahimjon Abdugafurov is Deputy Director of the Program on Law and Islam, Emory University. His research focuses on Islamic history, political theory and humanism.