Ethnographies of Islam in China

Ethnographies of Islam in China 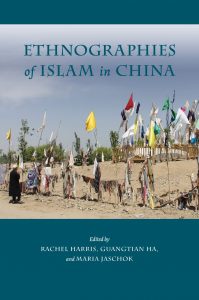 With China’s treatment of minorities making headlines practically every week, Ethnographies of Islam in China has arrived in a timely manner, providing much needed historical context, emotional depth, and analytical rigor. While the 13-chapter anthology invokes key historical figures from Chinese history, such as Zheng He, the Hui Muslim explorer, and important historical events like the 19th century Hui uprising in Inner Mongolia, the editors have consciously worked to ensure a “presentist” emphasis on the Muslim experience in China.

The book primarily focuses on the experience of Hui and Uyghur Muslims, with just one chapter devoted to Muslim Mongols, leaving out other important groups such as Kazakhs. The editors do state this upfront however, and where the work is strongest is in its exploration of Islamic revival and identity within each of these distinct cultural groups. From the proliferation of interests in women’s Qur’anic schools in Gansa (chapter 7), the ban on alcohol in Shadian, Yunnan province (chapter 2), to the drastic decrease in alcohol consumption in Urumqi (chapter 13), there are keen interests in being more observant Muslims for both Hui and Uyghurs. For many Uyghurs, being a devout Muslims is now a key part of their identity, to the point that some have eschewed traditional dancing and music in weddings since they are considered haram under Islam.

According to this study, the solidification of Muslim identity as an essential part of what it means to be Hui, Uyghur, or Mongol is catalyzed by external circumstances. One such factor is the Chinese government’s crackdown on freedom of religious practice, which further deteriorated with the launch of the “People’s War on Terror” in 2014. Chinese state repression, it is argued, has inadvertently bolstered Islam as a symbolic gesture of minority resistance. As a means of displaying their “other-ness,” many Chinese Muslims have embraced religious Islamic teachings and ways of life, with both traditional “Sinocized” Islam and the increasingly popular Saudi Salafiyya Yihewani and South Asian Tabligh-i-Jama’at movements competing for influence. Whether through state-sanctioned Qu’ranic schools in Linxia, historically China’s “Little Mecca,” or through being a musapir, or “traveler” without government-sanctioned ID cards, Islamic practices and beliefs now play an increasingly important role in the identities of Hui and Uyghur minorities.

Under this umbrella theme of identity formation for Muslims in China, the authors cautiously avoid projecting broad trends across groups. For instance, multiple authors admit that Hui and Uyghur communities are contentious within and without one another due to differences in Islamic beliefs and identities. Muslim Mongols do not really accept the Hui Muslims who live in their towns. The Uyghur diaspora are split into competing factions. Even in small countries like the Netherlands, there is infighting between the World Uyghur Congress followers and those of the Dutch East Turkestan Education Center. Moreover, despite the official motto of “do not split the religion,” sectarianism is increasingly becoming a part of identity formation. Yihewani urban Hui followers snicker at the way Salafis pray while Salafis consider traditional Chinese Muslims to be “non-believers” and “Hanicized.” Followers of the three main Sufi sects are viewed as suspicious by their Muslim Mongol and Hui neighbors. Ironically, Chinese Muslim diaspora groups in countries such as Malaysia and Indonesia, who, in their otherness as relating to their adopted countries, are the ones that gather under the umbrella of Chinese identity. Some who normally did not observe Chinese Lunar New Year are culturally observing them while others support mosques built in the Chinese style in lieu of their own minzu or Middle Eastern variants.

Identity formation is also approached in a number of innovative ways outside of traditional religions concepts and emotion. One chapter focuses on the entrepreneurialism of Hui Muslims in the exponentially growing market of halal food with the establishment of Yunnan Salaam Group (Sailiamu Jituan) and its role in the community. Another chapter by Yang Yang centers on the evolution of wedding photography styles in Xi’an within the Hui community. Yang uses the playful, lighthearted occasion of dressing up for wedding photos to demonstrate a shift from Western style to more Islamic fashion, specifically from Pakistan and Indonesia, as an outward manifestation of the revival of Islam in the identities of the younger-generation Hui minority.

Nonetheless, a dark, sobering undertone permeates the book. Despite the editors’ best intention of straying from the overtly political, multiple chapters discuss the deteriorating safety of the authors and their sources in various communities, the number of trips rescheduled and cancelled at the last minute, and the sudden disappearances of sources on WeChat and other social media platforms. Indeed, one of the authors, Rahile Dawut, a pioneering Uyghur academic who has inspired a new generation of ethnographers, disappeared in December 2017 on her way to Beijing. She has not been heard from since.

In order to truly understand Xi Jinping’s most recent policy of “ethnic cohesion,” it is imperative to understand the atmospherics and behaviors of Chinese Muslims and the intricate balancing act they have been forced to perform these past decades. While this anthology greatly contributes to this field, there are areas for improvement. For example,  throughout the study, names, phrases, and Islamic terminology are presented in English, followed by their original language expression, whether that be traditional Chinese characters, pinyin, and/or romanized Uyghur, Mongolian, Arabic, Farsi, or Turkish. Perhaps problematically though, the book’s editors did not standardize the originals, nor did they agree on definitions, such as with the concept of minzu, leaving the individual authors to explore this themselves. The end result is inconsistency at worst, and at best, repetitive paragraphs on semantics. Nevertheless, this remains a timely and invaluable contribution to the study of Muslim minorities in China.

Evanna Hu is a nonresident senior fellow at the Atlantic Council’s Scowcroft Center for Strategy and Security. Additionally, she is the CEO and partner of Omelas, an artificial intelligence (AI) and machine learning company working on mapping the online information environment. Follow her on Twitter @evannahu