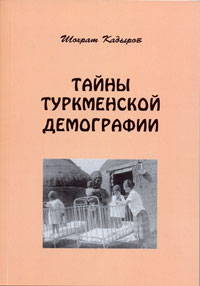 Based on Turkmen language material, the book explores the manipulation of population statistics by forcibly changing the number and composition of citizens for political purposes. The book examines the waves of anti-Soviet migration by Turkmen people in the pre-war period, Turkmenistan’s human losses during the Great Patriotic War (1941-1945) and the losses resulting from one of the largest earthquakes in the 20th century that took place in Ashgabat on October 6, 1948.

SearchPostsLogin
Book: Great Wall of Steel: China’s Global Campaign to Suppress the Uyghurs
Beyond Silence: Collaboration Between Arab States and China in the Transnational Repression of Uyghurs
Afghanistan’s Women: From Challenging ‘No Space’ to Being Silenced
China’s Global Dragnet
Pandemic Diplomacy: China’s Role in Central Asia in the Era of Covid-19
Resources for Understanding Events in Kazakhstan